7 of the Best Examples of World Building in Movies

With the imminent release of Luc Besson’s Valerian; a film based in a rich and deep alternate world, we look at other films that have well-conceived worlds. Ridley Scott’s/HR. Giger’s Alien franchise (pre-Prometheus era) sets up a gritty futuristic world that is not the shiny one painted in popular science fiction novels. Hundreds of years of space exploration, and humankind has never found a single life form in the far reaches of the galaxy. People are put in hyper-sleep to enjoy commercial flights across the stars but are also bound by the omniscient ‘Company’ that rules the Earth’s laws and logistics through profit. Military research causes these civilians to investigate potential life-signs in the sci-fi thriller, Alien (1979).

In the action-packed sequel Aliens (1986), we learn in the decades separating the storylines, the Company is ‘Building Better Worlds’ through colonising dead planets. But despite their cheery tagline, the Company is not as much interested in creating brighter futures for the human race, as it is focused on investigating and studying homicidal life forms that bleed acid for military purposes.

The suspenseful Alien 3 (1992) adds further lore to this sad and practical future when the protagonist Ripley (Sigourney Weaver) crash lands on a prison planet, wholly populated by convicts and religious converts. The Company tries to close down the maximum security planet, but the condemned men turn to an apocalypse version of Christianity, and their reshaped faith to live out their mundane toxic scrubbing lives – that is until a woman with a deadly Xenomorph seed disrupts their status quo. In the original Alien franchise, the stars aren’t filled with wars or meaningful treks – but screams in the name of dollar signs. Tim Burton is one of the truly unique cinematic world builders. There are various examples of the great work he’s done in his films, but none come close to that of Batman and Batman Returns. Before 1989’s reboot of the Batman film franchise, all we had was 1966’s Batman: The Movie, starring Adam West in the campiest, most ridiculous portrayal of the character to date. That film of course followed on from the 60’s TV series, which, along with that film, has reached classic status today.

It wasn’t until Burton stepped in to reboot the franchise, that we got to see what is arguably, the best portrayal of Batman on the big screen. Burton’s vision of a dark and brooding Bruce Wayne/Batman, along with his ultimate nemesis Joker, and his version of a gritty, crime-filled Gotham City was a first for the big screen, knocking the socks off anyone watching it for the first time.

Batman Returns introduced more villains and showed even more of the famous city, but was a lot cheesier than the first. Nevertheless, the world Burton envisioned crosses over between the films, making for some excellent consistency. It would take another 13 years post-Batman Returns for another director to step in and reboot the series – and bring about another, brilliant new world to host the caped crusader’s adventures in. 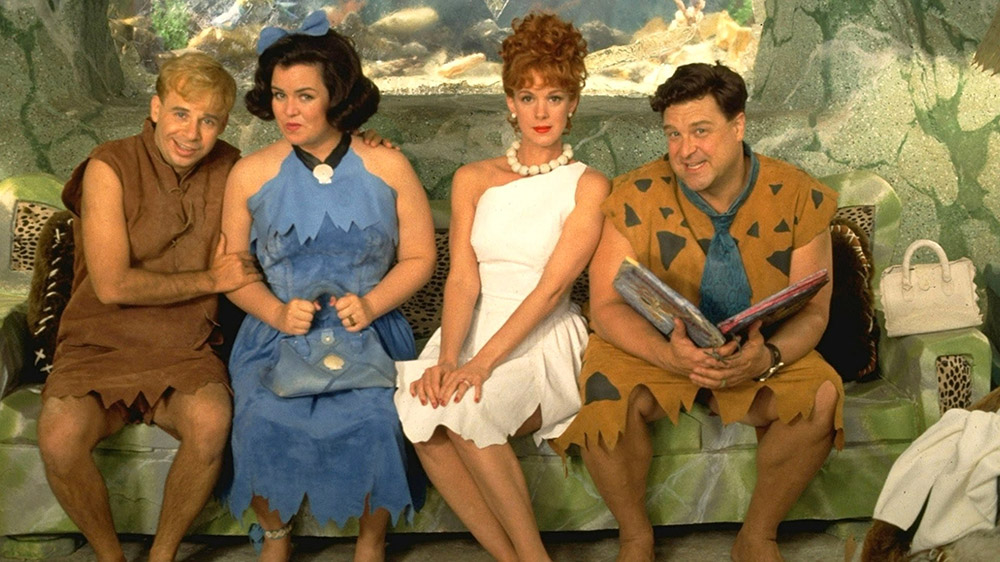 On paper, it sounded like the stupidest idea in television history – a universe where the stone-age intertwines with suburbia. But on screen, it was the greatest thing since sliced mammoth meat. When The Flintstones first premiered in 1960, many a child who watched the show was practically hypnotised by this amazing world where dinosaurs could be cranes, and our cars could be powered by our feet. Just about every viewer wished that this world could exist in real life. So imagine the fanfare when the series was brought to life on the big screen… Twice!

Though the live-action adaptations of the cartoon were disappointing at best, the recreation of the world we first fell in love with every Saturday morning was 100% perfect! To see Bedrock as a 3-dimensional city (made entirely from scratch) was like having all your birthdays come at once. Truly a work of CGI-less genius! By no means is the significantly dumbed-down universe in Idiocracy as epic as Middle Earth, TV’s Westeros, or Harry Potter’s (still realistic) magical world. But in all its oddity, it manages to be strangely poignant, which helps to make it an unforgettable alternate world. When an average-Joe type army librarian (Luke Wilson) and a sex worker (Maya Rudolph) wake up after being frozen for a secret Army experiment, they emerge in the year 2505, finding themselves in a world gone to crap. People are named after soft drinks, execution by monster truck is rife, and crops are dying because people think they should be watered by sports drinks. Seriously. And the President, Dwayne Elizondo Mountain Dew Herbert Camacho (Terry Crews), also happens to be a porn star, wrestler, and the country’s smartest man. Wow, he can really do it all, can’t he?

The world presented in Idiocracy may be slightly classist and ableist, absolutely. But mostly, it provides an acute, and often humorous commentary on the direction the world is taking, the way that consumerism can control us, and the way that people who are gifted with talent and even a little intelligence serve to manipulate the masses until we’re heading to Starbucks for sexual relief. That hasn’t happened yet, but hey, Donald Trump was elected President, so anything’s possible. No one builds a world quite like Guillermo del Toro. His perfect intersection of childlike wonder and adult terror make for a unique display of visuals and themes. This skill of del Toro’s is best represented in his 2006 Oscar winner, Pan’s Labyrinth, where a period war film set just after the Spanish Civil War is fused with a macabre horror fantasy to create a film like no other.

Perhaps one of the greatest features of Pan’s Labyrinth is how well each side of the story complements the other. While the terrors of the Labyrinth and the monsters that live in and around it are confronting, so are the terrors of the real world. Much like other great fantasies, the hidden world we see tells us something about the real world our characters are living in. Del Toro uses the Labyrinth not only as a visual spectacle but also as a thematic one. While the value of the storytelling cannot be overstated, the same can be said for the bold and dark aesthetic, costuming, set design, and of course, the monsters, which will go down in history as some of the most affecting and unique creations in cinema history. District 9 is a 2009 fantasy/science-fiction film that paints an honest portrayal of what is happening in our own world every day. In the alternate world of District 9, aliens come to earth, not to invade or steal our home, but to find refuge from their planet, and in doing so they become the human world’s refugees. The aliens reside in disgusting camps outside of Johannesburg in South Africa, and the locals refer to the aliens using the derogatory term ‘prawn’, referring to their bug-like appearance. To survive, the aliens steal, fight and dabble in prostitution, whilst being demonised in the media as dirty and not to be trusted. The film follows a field officer working for the government, Wikus (Sharlto Copley), and his journey battling a disease that’s slowly turning him into his worst nightmare – a ‘prawn’.

The film creates an alternative world that represents our own, providing a thinly veiled comment on how we treat our most vulnerable. It takes more than fancy sets and CG littered creatures to create a cinematic world, particularly one of any worthwhile meaning, and rarely do you get one so finely made, conceptual, and polarizing as Christopher Nolan’s visionary film Interstellar.

Centred on NASA-pilot-turned-farmer named Coop (Matthew McConaughey), this ambitious venture sees Nolan at his most imaginative; his film truly going to infinity and beyond in the wake of our own impending extinction. Coop’s world, once the sun blazing, mythic grandeur of the American farm belt, now riddled with famine and coated in dirt storms sure to choke humanity to its cruel, eventual death. Prompting our lead into a harsh decision – spend the closing decades of life with your family, dying by their side in submission, or act, leaving them behind to embark on humanity’s greatest venture – the 4th-dimensional plane through time and space, bearing witness to the new homes and horrors humanity may live on to call their own.

Nolan’s story never shies from the intricate, bearing witness to new forms of evolution akin to Kubrick’s revelations in 2001: A Space Odyssey, unfathomable worlds of sea and glaciers that seem impossible to the eye (yet have a real basis in science), and most importantly the emotional toll of humanity in the pursuit of resilience. There are very few worlds as affecting as Nolan’s.

We left out the 3 big ones on purpose because really it doesn’t get much richer and better thought-out when it comes to world-building than the following:

Let us know what other great examples of movies with awesome world-building we’ve left out in the comments below.